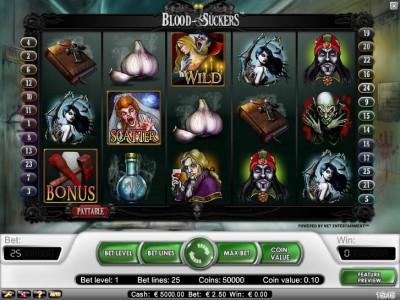 In the past few years it seems that Vampire’s have come back into fashion. Through films like Twilight it seems people have a renewed interest in this classic film character and the occult world that comes with it. This is something that hasn’t escaped the world of online casino gaming. NetEnt has looked to jump on the trend with Blood Suckers. Already being lauded for its silky smooth graphics and well-polished animations, is blood suckers a slots title that lives up to the NetEnt name?

When it comes to reputation, few companies can rival NetEnt. They are well known throughout the world for their high quality slots titles and being the very best when it comes to smooth graphics and animations. Blood Suckers is no exception to the rule. All on screen animations carry that element of gore; while even the music has a certain eerie feel to it. With its vampire theme and creepy looking design, Blood Suckers sums up exactly what it means to create a truly sinister looking slots title. Given its look it is no surprise to see just why it is a popular game amongst casual slot playing audiences. Blood Suckers from a gameplay perspective follows the classic NetEnt format. 5-reel, 25-payline, and full of your typical vampire hunter iconography, everything from the Bible to a wooden stake can be found amidst the reels. The wild symbol is a vampire biting a woman’s neck. When found it unlocks the true winning potential within the game and could lead to you taking home a cool €50,730 grand prize.

Where Blood Suckers truly delivers is within the bonus department, as it is simply all-action. The first bonus feature that needs addressing is the free spins feature, this can be unlocked when you land the Vampire Bride scatter symbol anywhere across the five-reel setup. Land that symbol and you’ll be given 10 free spins. But that’s not all; as any winning combinations won during such time are tripled, plus should you land any more scatters you will be rewarded with yet more free spins. The next feature is the wooden stake symbol, which unlocks the Vampire Slayer bonus feature. During such game you will be whisked away to a coffin filled ancient burial ground and you will need to open the coffins to see what prizes lye in store. Blood Suckers also features the classic NetEnt trademark skill-stop feature, which allows players to stop the reels at any time. This feature is perfect for those who want to increase the speed of the game.

Simply by looking at Blood Suckers, you will able to see that it is a game that is aimed at a younger audience and that’s not a bad thing. Blood Suckers is a slots title that truly encompasses a fresh feeling through what are high-standard graphics, quirky animations, and well-constructed gameplay. Partner all that up with the fact that it features some fun bonus features and some healthy jackpots, and you can see why Blood Suckers is all set to become a runaway smash hit.