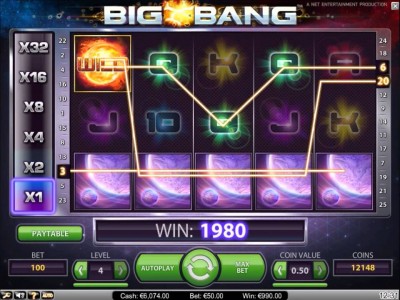 Should you want to play an online slots game that focuses on space and the unknown then you really won’t have to travel far. The sheer number available shows that the genre carries plenty of charm, of which many can’t see to get enough of. In recent years NetEnt have developed and released the likes of Space Wars, Starburst, and Alien Robots, but judging by their latest release, the company isn’t finished with the genre just yet. Big Bang Slots is the latest creation from NetEnt and it promises to take the world of online slots to the next frontier and beyond.

Any space-inspired slot title is obviously going to draw comparisons with NetEnt’s flagship title Starburst. But in the gameplay Big Bang Slots may even out-do the developer’s biggest draw. Multipliers will prove to a big selling point for Big Bang Slots, as why they may start at the usual 2x level, they can reach a high of 32x. Hit a wild and that can substitute for other symbols, so when utilised fully you could find yourself winning over 268,032 coin. That alone makes Big Bang Slots a must play game for everyone, no matter of skill or experience. Given that it is one of the first games to offer a multiplier of such size, players can theoretically only have to spin the reels a few times to find themselves winning a notable cash prize. The game and its 32x multiplier really is a genre changing and could change the winning setups of other NetEnt developed games in the future.

Given the prizes being offered within Big Bang Slots it is no shock to see that bonus rounds aren’t really considered necessary. The experience more relates to a game within a game; as the multipliers offered have the ability to take you to the biggest possible win in only six spins. The way this works is simple, spin the reels and land a winning combinations to get an initial 2x multiplier. From then on, each winning combination you land will see your multiplier increase, hit six in a row and you’ll have the 32x multiplier at your disposal. While it isn’t a true a ‘bonus game’, the multiplier setup definitely works as a game within-itself in many ways. Anyway, who actually needs a bonus round when you are only ever six spins away from winning more than 260,000 coins!

Futurism and online slot gaming have a tendency to go hand in hand. The universe just has this tendency for making a great online slot game backdrop. Taking inspiration from the deep depths of outer space, Big Bang Slots is the latest innovation to come from the NetEnt team and it could prove to be an industry changer. The beautiful design and new 32x multiplier setup has pushed Big Bang Slots over the top and could be the game that forces other developers to raise their game.