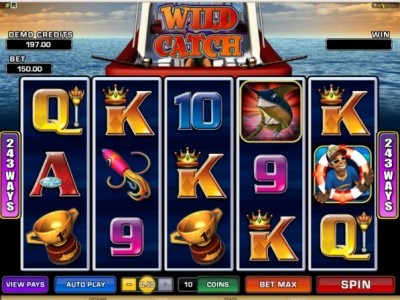 If you were asked to name a sport that would adapt perfectly to the world of online slots, I doubt many would say sea fishing. But as Wild Catch has shown, the realm of casting out a line has actually adapted itself well to the online casino dominion. The supposed real mans sport of heading out a boat and trying to land the big one has helped form a unique slots theme. Microgaming have brought the all-action world of fishing to life in the online slots world. Featuring a massive 243 ways to wins, does Wild Catch prove to be the catch of the day?

As you would have guessed, Wild Catch is game that is based solely around the sport of fishing. The design features a single boat in the middle of the deep blue sea, with a sunrise appearing in the background. It looks like the usual Microgaming fare in many ways, but it does carry a real sense of tranquility about it too. As far as being a leading Microgaming title goes, it does feature a futuristic tweaks and upgrades that put it above other titles from the same developer. Graphics generally appear crisper and animations seem to flow better than they have in the past. Wild Catch looks great and plays great, even if won’t go down in history as a technological masterpiece.

It is always great to see a game come up trumps when it comes to bonus features, so much so that I glad to find out that Wild Catch actually delivers two high-quality bonus features. The first feature is connected to the on-screen wilds. Land three swordfish wilds and you’ll be taken straight to the mini-free spins bonus rounds, with five free spins to play the reels with. All prizes found within the reels are subjected to a 3x multiplier too, giving you the chance to bump up your winnings to no end, plus you can get additional free spin for each additional swordfish wild you find If you haven’t got enough free spins form the wilds bonus feature, then keep an eye out for the scatter symbol. Increasing the level of action, should you find one, two, three, four, or five fisherman scatter symbols you’ll be on course to win up to 20 free spins. You can also get hold of several high level multipliers too, making it a very lucrative bonus round. Both bonus rounds compliment each other perfectly and give players the chance to ‘reel’ in some big prizes.

Wild Catch may not look like much at a face value, but when you dip below the surface you’ll find that it is a game that offers players na ocean sized online slots experience. The two things that combine to make this game so fun are the graphics and the bonus features on show. Both of which create that anything can happen atmosphere, the likes of which you would only find out on the open water. Wild Catch is a game that is definitely easy to get ‘hooked’ on.