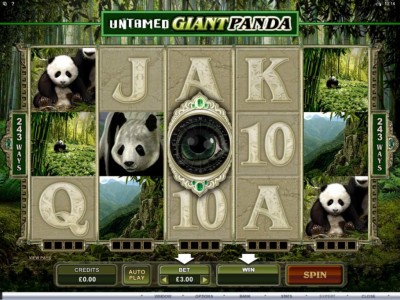 Its name ranks among the truly bizarre in the world of online slots, as Untamed Giant Panda doesn’t really evoke thoughts of money and success. But the “Untamed” series has actually become a major hit amongst the Microgaming game catalogue, as the Bengal Tiger variation has proved. Following on from that success, Untamed Giant Panda entered development it has now arrived on several Microgaming powered casinos. Considered by many to be a visual masterpiece, does Untamed Giant Panda bring together all the other elements to make this a must play Microgaming slot title?

Often described as a piece of art more than a game, Untamed Giant Panda is a fantastically designed game. Transporting you from the casino to the heart of the jungle, through the game you will figuratively come face to face a giant panda. The on screen graphics look amazing, from the mountain views to the sweeping jungle backdrops, this game is going to captivate your attention. ‘Untamed’ has been given the thrilling tag and for good reason. The games design really does work to add to the overall excitement of the title and its expertly drawn design really is a pleasure on the eye. The game mechanics mean that players have 5-reels to navigate, all of which feature beautifully designed symbols and icons, while there is even a whopping 243 ways to win too.

High-end graphics are one thing, but a worthwhile bonus feature is something else entirely. After getting to grips with the games credentials, you can look to move through it and access the bonus rounds. Stepping into the jungle and to the heart of the fight, your goal is to find the sticky wilds. After locating one or more you’ll find yourself in the free spin bonus round, which will allow you to rack up not only plenty of free spins of the reels, but also plenty of cash multipliers that can bump up the wins. Moving on, finding three scatter symbols will give you not only 10 free spins instantly, but any wilds that pop-up as a result of a free spins stay on screen. This means you could spin and spin and spin should your luck be in. Untamed Giant Panda also features the likes of ‘Lucky Nudge’, ‘Brilliant Wilds’, ‘Your Gamble’, and ‘Collect a Wild’, all of which add to the game experience.

Untamed Giant Panda is arguably Microgaming at their very best. Enjoyment is abound when you play this title and in many ways it is the perfect follow up to Bengal Tiger within Microgaming’s wild animal related series. The features found with the game really are top drawer, while the graphics are not only easy on the eye but they also do a lot set the atmosphere too. Even down to the music and in-game sound effect, Untamed Giant Panda is an evolutionary and engaging slots experience. If you are a player who is looking to take a walk on the wild side, then give Untamed Giant Panda a try.