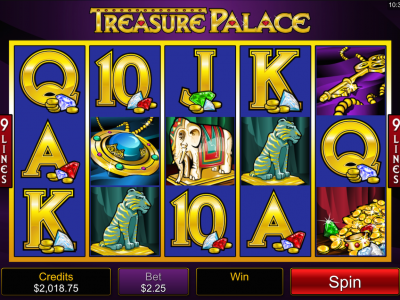 The Indian subcontinent is considered to be one of the most beautiful in the world. Its dusty landscape is undoubtedly picturesque and its hot summer nights have been the premise behind countless Hollywood movies. It was only a matter of time before the online casino world would seek to captivate on the region’s beauty. Developer Mircogaming have clearly seen the potential in the theme and have brought it to life in the mobile slots title Treasure Palace.

Take one look at Treasure Palace and you will see that it is a fairly basic title in the mechanics stakes. Players will fund three rows and just nine paylines, while that seems basic; the games design more than makes up for its mechanical limitations. Set in the world of Indian Princes and Princesses, the game features a glorious backdrop of lavish palaces, gold, and other luxury items. Those who have been with Microgaming since the beginning will be quick to note that the game is in many ways a throwback. Treasure Palace looks like many of Microgaming’s older titles and showcases plenty of nostalgia. The backdrop is detailed but distant, while the reel symbols are large and very much in your face. In the days of complex and seemingly story driven slots titles, it is a great to see a game like Treasure Palace go back to basics.

Within Treasure Palace there are five high value symbols to look out for, these are the tiger statue, gold coins, an ornamental elephant, a jewelery box, and a prince. The prince is considered to be the most important of all the symbols, as it is worth a whopping 1000x multiplier on your line stake. The wild symbol is a gold brooch, which will substitute with other symbols (excluding the scatter) when found. The scatter symbol is a gold key, when three are found, an opening door animation will play and subsequently provide you with a playout. The game itself is pretty much effortless to navigate, just swipe left to see audio and wagering options and swipe wipe to see the paytable. It really is that easy to play, but a word of caution must be issued. Microgaming has made their name for their bonus features, but they have switched things up here. There is no bonus features or bonus rounds to be found within Treasure Island. In such instance Treasure Island does disappoint, but the game itself does plenty to make up for it.

It seems that many developers try to cram as much into a mobile slots title as possible these days. While there is something to be said for innovation, in many cases it just results in a clunky and cluttered game. Taking such criticisms on board Microgaming have opted to go back to basics with Treasure Island and it works. The game delivers a simple yet engaging mobile slots experience that features smooth animations and big payouts, even in spite of lacking of any notable bonus features.