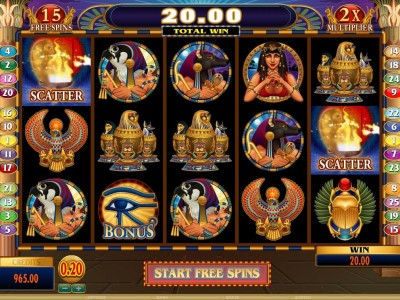 Let’s face it; in the world of online casino slots it is hard to be original. What can be done in many ways has been done, which means that uniqueness is hard to come by. Throne of Egypt, the latest title from Microgaming, may not reinvent the wheel, but it definitely adds a new indent to it. It will seem familiar in the way it plays, while the Ancient Egyptian theme hardly represents any great leaps in originality. Microgaming is an online casino game provider with a stellar reputation, but in Throne of Egypt have they created a game that represents imitation or innovation?

The market of Egyptian themed slot games is definitely an oversaturated one. It seems that every developer, both small and large have tried their hand at such with varying levels of success. While Throne of Egypt doesn’t break the mold, it does have some commendable design features that help separate it from the rest. The game does away with the traditional backdrop, something that is seldom seen these days. Instead you are presented with a full-screen reels experience. The reels themselves are cleverly designed and feature smooth as silk animations. The artistry is also commendable, as the Egyptian-themed symbols include treasure chests, ornate vases, and scarab beetles, all of which look bright and colourful. It won’t ever go down as a visual masterpiece, but Throne of Egypt does more than enough to get by.

It is within the realm of bonuses that Throne of Egypt truly comes to life, putting it head and shoulders above all other Egyptian themed online slots titles. The in-game wild symbol is fully stackable on all reels and offers up the chance to land some serious winning combinations. On top of the stacked wilds, there is also a free spins bonus round. Should you land the flame scatter symbol on reels one and five you will be given 15 free spins right off the bat, with more being offered should your luck be in. After going through the two low-level bonus offerings, you can move up to the ‘Bonus Chamber’. This is the big bonus feature with Throne of Egypt and it can be activated by landing the Eye of Horus symbol on reels four, three, and two. When you start playing you will need to make your way through three mini-games in order to unlock the Scarab Bonus, the Eagle Bonus, and the Princess Bonus. All in all, the bonuses offered in Throne of Egypt are some of the very best in the world of online slots.

If you thought that you had seen all there is to see within the world of Egyptian themed online slots titles you may need to think again. Throne of Egypt does all it can to raise the bar and in the world of bonus features it seems to do just that. The design isn’t going to blow you away, but it may be the most entertaining and enjoyable Egyptian themed online slots to date.