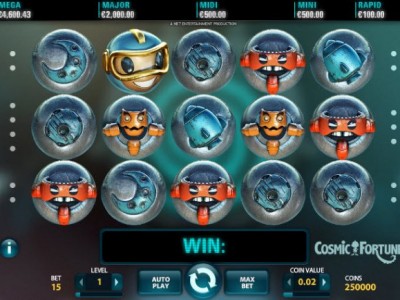 If any developer produces games that are truly worth waiting for, it is NetEnt. Cosmic Fortune is the latest game from the company and it is one that is worth waiting for. Based around the alien invasion concept, one that has seemingly been popular since the 1980s, this new game immediately looks to have all the makings of a classic. From the impressive intro video to the high-end animation quality, Cosmic Fortune looks to be an online slots game that has it all, but does it deliver where it really matters?

There have been plenty of games released this year that have been visually impressive, but few have come close to Cosmic Fortune. The futuristic look of the game is fantastic and really does a good job of creating an in-game atmosphere. The sound is also top notch, encompassing all the zaps and zings of a true space adventure. Within the game itself you’ll find a metallic and ‘shiny’ look. Each reel is represented by a metal sphere/orb that has a space or alien themed icon on it. The characters that make up the reels are the moon, an asteroid, a spaceship, a goggle wearing hero, and a pink monster. The games wild is a gold ‘W’, while the scatter is a blue ‘S’. Visually Cosmic fortune represents the complete package and it is yet another stellar offering from NetEnt, at least from a design perspective.

Bonus rounds and bonus features have become NetEnt’s bread and butter over the years, as they seldom disappoint in such department. Cosmic Fortune keeps this trend going by offering up two different bonus games. Triggered by landing three of the ‘W’ scatter symbols on screen, the Free Falls Bonus Game, see’s you receive ten free spins for each winning combination made. You will also receive additional ‘symbols’ for all winning combinations made, which can subsequently be turned into marbles that are collected underneath the reels. After collecting enough you will move on stage two of the bonus game where you will need to drop the marbles onto cups and spaceships, with the right hit earning you a prize. Hit three or more and you’ll find yourself playing for a progressive jackpot. Cosmic Fortune also features a cascading reels bonus feature too, which opens the door up to more combinations and more chances to win. Prizes through the cascading reels rank at Rapid, Mini, Midi, Major, and Mega. From a bonus perspective Cosmic Fortune lives up to the NetEnt rep which is great to see.

It seems NetEnt just put out hit title after hit title and Cosmic Fortune looks set to be another smash. By sticking to the classic NetEnt formula of delivering a graphically impressive online slots experience, plenty of big jackpots, and main-event level bonus features, Cosmic Fortune is simply pure fun at its core and that stands for a lot.