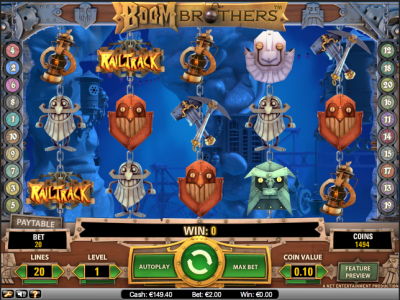 Given the quality of the games that NetEnt create, we aren’t like any other reviewer when we say that we are always happy to see a new NetEnt title released. Boom Brothers is the latest game to emerge from the NetEnt laboratory and we were pre-programmed to expect it to be a high-quality game. Set within a deep underground mine, it features comic characters the Boom Brothers in their efforts to locate diamonds, rubies, and gold.

From a gameplay perspective Boom Brothers plays in very mechanical fashion, but such does keep in tone with the game. The on screen cogs turn slowly above the reels, with the chains connecting them consistently pulling them back and forth to add to the whole mining atmosphere that the game creates. The reels themselves contain various symbols and consistently pull up and down through the earth. Each reel symbol is related to mining in some way, with buckets, pickaxes, hammer, lantern, metallic, and helmet can all be found here, while the wild symbol is a railtrack and the wild is a fizzing bomb. From a NetEnt title you really expect a game that delivers an immersive visual experience. In many ways, Boom Brothers has slipped under the radar from a hype perspective, but that certainly doesn’t mean that it doesn’t provide a top-drawer design.

One of the main reasons why NetEnt games have become so prominent is because of the company’s approach to bonus rounds and bonus features. Boom Brothers features a similar trademark within its bonus offers. When this happens it is dubbed ‘Second Chance’, it happens at complete random. The Boom Brothers will run on the screen and either spin a reel or explode a symbol in order to increase your chances of winning. Boom Brothers also features traditional free spin bonuses too. When three free spin logos appear on screen the feature will activate and reveal a number between 8 and 50 at random, with the number revealed being the number of free spins you get. All prizes won during this round will have a 3x multiplier attached too. The key bonus feature within Boom Brothers is the ‘Railtrack Feature’. Find three railtrack symbols and you will unlock this mini-game. Part one of the game requires you to help a dwarf walk across the reels by landing the correct parts on reels five and four. Part two requires you to find the gold bar, which will be within one of the three carts located at the bottom of the screen. Should you do this successfully, the big prizes will be on their way to you.

Slot games are generally serious business these days, that’s why it is refreshing to see a game that injects some humour back into the world of slots. Boom Brothers does just that through a slots game that provides plenty of ‘bang for your buck’ in the fun stakes. Through innovative bonus rounds, big jackpots, and entertaining visuals, Boom Brothers is an online slot game that provides hours of fun.